Born in Wales. Studied Art in London.BA distinction at Hornsey college of Art.Various Academic and studio based Lectureships at London Art schools and Universities Exhibiting drawings and paintings nationally and internationally. (visit CV) 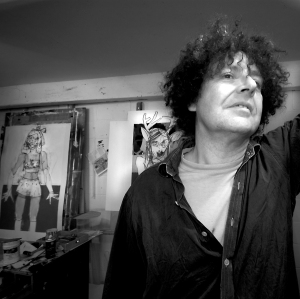 Chris Milton  on about saying too much

Visual Art is about images. I try to avoid limiting interpretation by using words to describe what I paint or draw, ultimately you just need to look and reflect. As when you stare at a flower you don’t question what it is about, it just simply “is” and it seduces you into your own floral memoir’s. I guess I‘ve made a display of dried flowers that hint at symbolic archetypes, twisted and rooted in meanders of some romantic past. I try to make “beautiful” open poetic things, a sin in these days of verbal accountability and the conceptually grand but thin “big idea”. All I intended to do these days is to be sincere and romantic, to the point of embarrassment beyond words.

The series of mythographic works was initiated by a chance encounter with a set of old Kodachrome slides, revealing images that I had created long ago and had not seen for over 30 years.At that time and with the enthusiasm of youth I had embarked on a poetic quest to try to understand the arcane religious visual symbolism of ancient Western and Asian cultures.

By the end of it all I was seeing Jesus in the wallpaper, and had produced a series of works that were more like illustrative narratives than the revelatory art works I had hoped to achieve. Nevertheless, and with the advantage of 30 years worth of hind sight I did notice certain visual elements reoccurring amongst the flurry of visual ephemera I had failed to edit out. These elements form the basis of this new series of works, only this time there was no consideration or rhyme or reason, I just threw them down over a number of canvases, like one would throw dice or runes seeking to reveal some prophetic truth.

Before me was the great compost heap of an immature quest started over 30 years ago, something left undone a long time ago. But now, as time runs out there comes a crucial point when judgment is cast aside and one has to have faith in the outcome. This reminds me of an old French existentialist quote, “the images that come before thought are the phenomenology of the soul, the images after thought are the phenomenology of the mind” my earlier works illustrated the latter.

I am weary to say these new works are revelatory images of the soul, and am aware that they may, or may not reveal truths about the way things are or the way we remember the romance of what was and what is yet to come.

Initially this sounds like an emotional approach, but it is most definitely not. The work was initialised by many thought’s and much avid reading at the time, at the end of which one is left with a chaos of words and images that make no rational sense and one is compelled to “intuitively feel” rather than think. Therefor in resolving the images there was no intellectual rationale, all that guided me was the aesthetic, “how does it look, what was the feeling being generated, and do I compound that, and does it feel right/sincere”.

Drawing is my primary practice, it is a tool that reveals, creates and records information.

Drawing has a lucid and deceptive simplicity that renders form and meaning all too quickly the content rapidly and spontaneously manifests itself, arriving on the paper apparently prior to any considered thought process or intention, requiring me to acknowledge what I did not appear to know or may never know.. This rapid and ephemeral nature of the medium has a catalytic effect enabling a ruthless distillation process within the work, enabling me to overlay, obliterate, and edit, to define and derive content.

The drawings can form the basis of paintings, but within this process a reflective analysis to further define intention and direction inevitably gives rise to concepts, and one falls to juxtaposing images and making associations in a desperate, yet rational attempt for understanding. A desire to distil the content, to progress ones work, to define order and meaning and direction, but being ever mindful that it may not lead to certainties or truth of ones place in this world, or the way things are.

These opposing activities of trying to find sense and reason and at the same time accepting that reason may be beyond ones logic in this context creates a dynamic tension; a synthesis of the intimacy of expressive drawing fused with the more considered critical distance of contemporary painting practice.

The drawings themselves appear to be representational, but no specific person or place is visually depicted. It is more a rendering of a specific content, a distilled essence or archetype reminiscent of particular “types” of people, places, everyday objects, and the feelings these universally evoke. The characters are mere figments of the imagination; the works are therefore not a voyeuristic reportage in the traditional sense. They are initiated by memory, feelings and responses; as opposed to the detached critical distance of direct observation.

You describe your work as growing out of

“an analysis of intention within a theme.”

Would it be true to say that your reactions to

physical form through your process of reflection

Yes, the experience of certain things do not

register at the time, they gradually sink in.

Through the process one’s original intention gets

somewhat left behind and it is not known what the

final result will be. The nature of the work is

experimental and the conclusion is either a

There seems to be a sense of freedom in the lines

of your drawings; the movement seems furious,

Do you find the process of creating very liberating?

I used to work in a tight, photo realistic way but I

found this for me was more of an illustrative process.

I work with spontaneity, I let the image happen and

then reflect on it. I feel that trying to preconceive the

The characters you create have been described as

capturing an essence from a remembered experience.

Do your characters belong to a visual narrative as well as

existing to make the viewer sensitive to a feeling or atmosphere?

mean people or loving people, the aura from a type

of person, a particular archetype.

into consciousness through the creating process.

I gradually distil the energy of a past experience until

the essence of a “type”person appears.

When creating an atmosphere from a particular experience

do you provide one piece of the jigsaw or many?

I suppose I provide one piece in a way, however,

people are more complicated than that; they have many factors.

bits inside the one piece.

and how would you like it to be interpreted?

I cannot control how they interpret the work. I would hope

that it reflects some essence of a person’s own experience,

that they would be reminded of a feeling that already exists

within them. The works add to the viewers’ own narrative;

makes them relate to the piece. You could compare the

suggestive nature of the work to the difference between poetry

and prose; the prose tells a story whereas the poem hints at something.

them to gain this from the work.

Over the Moon seems reminiscent of Picasso’s Guernica,

is this an intentional reference? Who else inspires you?

No, that was not an intentional reference. My influences vary;

I love Picasso and the way he draws. I admire all artists who draw well

I feel I can relate to Basquiat. However, I am here to express me,

relationship with the influences as an affinity rather than a liking.

What future plans do you have for your practice or projects

you are involved in?

My practice goes through constant evolution,

I have constant revelations, I try to avoid traps and get it right.

I keep the work spontaneous and instinctive and work out later

why it has happened.

1985-2016 Exhibitions (all listings are in chronological order)

Programme consultant National board of studies Foundation Art and Design

One thought on “About”